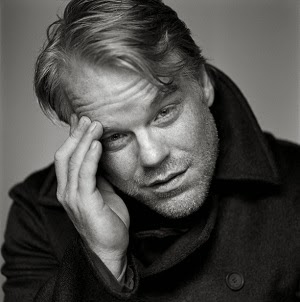 I remember the first time I noticed Philip Seymour Hoffman. I'd most likely seen him in a million other things. But, my boyfriend at the time told me about this awesome movie, Almost Famous, and said I had to watch it. I did and it changed my life. I've said it before on this here space: That movie helped me figure out what I wanted to be, what I wanted to do with my life. A huge part of that film was, of course, the legendary Lester Bangs, played by Hoffman.

Hoffman was born to play disheveled and frenetic roles like Bangs. Could he nail a more pristine, put together role? Sure. He proved that when he took on Capote and The Master. But he shined when he played roles like Lester Bangs or Pirate Radio's The Count. He didn't just "captivate" in his roles, he made you want to be those people. When I watched Pirate Radio, I wanted so badly to be crazy DJ on a boat floating out in the sea, illegally exposing kids to rock and roll. I still blame that movie for my desire to live on a houseboat. Most importantly, though, when I watched Almost Famous, I wanted to be Lester Bangs. I'd like to live slightly longer and fry less of my brain on drugs, obviously. But I want to be that good. I'm not sure anyone else could have made that role so lovable, though.

In the movie, Hoffman perfectly embodied Bangs. Bangs was a messy, under-appreciated, cough syrup addled rock critic. He didn't care about much, but he loved music and the way it could make him feel. Bangs seemed to have a soft spot for even the bad stuff, the stuff people ignored, the stuff I'd rather just not even waste my time writing about. He may not have liked it, but he loved writing about it... as if his reviews would somehow force these so-called musicians to better themselves. Bangs also had a soft spot for one kid who was desperate to be like him, except slightly less addicted to drugs. In real life that kid would turn out to be Cameron Crowe. In the film, that kid was William Miller and the scenes in which Bangs rambled on and on to the wannabe critic were some of the best.

Most days, I feel like William Miller. Greg Kot and Rob Sheffield are my Lester Bangs. But, someday... someday I want to be someone's Bangs. Bangs died two years before I was born. I can see pictures of him and read his biography, Let it Blurt (which I highly recommend), but I could never experience him in person like William/Crowe was able to do. For me, and plenty more in my generation, Philip Seymour Hoffman was as close as we got. Hoffman's face and voice will always be what I see and hear when I read old reviews from Bangs. He not only introduced a new idol onto my radar, but he became that person and became one of the very few actors I kept up with. Honestly, as much as I loved William Miller, I have no idea what the kid who played him, Patrick Fugit, is up to now. I kept up with Hoffman, though. I adored his work on Hunger Games and, as an accidental TV writer, I was thrilled for his upcoming leading role in the new show Happyish. Once-a-week doses of Philip Seymour Hoffman? Yes, please!

Much like Bangs, though, Hoffman is gone now. "Wasted potential" is a phrase often thrown around a lot when someone magnificent dies too young. It's been used on Hoffman already and was probably used for Bangs, too. I hate that phrase. It's so bitter. Much like money, I'm not sure you can take potential with you once you go. Plus, Hoffman leaves behind a resume of some of the best films and roles in history. His time wasn't wasted at all. He put his time on earth and all his potential to damn good use. What the hell are you doing? What the fuck am I doing?

Hoffman was like a friend I wanted but never had. He played an idol I'd never meet and, incidentally, became one himself. There is a row of movies on my shelf that show fully all of Hoffman's potential. All I can hope is someday, somewhere, someone has a shelf to show off all mine.

Rest in peace, PSH. You'll always be the best in my book.

XX
Posted by Unknown at 4:00 PM No comments:

I was stretched out in the bathtub one night reading Rob Sheffield’s book, Talking to Girls about Duran Duran.  He was discussing the way girls get when they talk about a band they loved in their youth.  Basically, he described what it meant to be a fangirl (or fanboy) and what it looked like from the outside.  One thought led to another (as they often do) and soon I was thinking about my own fangirling.

Over the years there were a few bands that truly spoke to my inner OCD princess.  The line of succession went something like this: Hanson, Our Lady Peace, Blink 182, John Mayer, Mumford and Sons.  There were a million bands in between that I also loved.  But these were the five that demanded I spend my last four bucks on a magazine with 100 words about their newest album, twenty bucks on an import from across the pond and hundreds of dollars in concert tickets.   He spoke of how, as we grow up, we may distance ourselves from the person we were during the eras of each band, but our love for those bands, those obsessions, would always come bubbling out.  Fangirling.  Even men do it.

From time to time I try to hide my inner-fangirl.  I don’t often share that it was only recently that I finally threw away my binder full of Hanson posters (over a thousand), the number of Mumford & Sons concerts I’ve been to or the letter I never sent to John Mayer (about what a freaking idiot I thought he was to record with Taylor Swift).  Some things no one needs to know.

When I find myself pulling in, building walls around the biggest sections of my heart, I know it’s time for another viewing of Almost Famous.  I’ve considered Cameron Crowe one of my heroes for a very long time.  Recently, I even tweeted about my love for him and geeked out when he replied with a “Thank you, Audiodaughter.”  It didn’t matter than I knew he had no idea who Audiodaughter was or why she loved him.  All that mattered was that he tweeted to me!  For a long time, I thought he was my hero because, for a while anyway, he wrote for Rolling Stone.  Since Almost Famous is semi-autobiographical, it’s also safe to assume he’s been on the road with some pretty awesome bands.  This, dear friends, is my dream job.


As I sat in my bathtub, though, I realized my appreciation for him went much deeper than his making my favorite movie and writing for my favorite magazine.  In one movie, he suddenly made it okay for me to be two things: A fangirl and a geek.  Those two qualities basically sum up my existence.  During most of my young adult life I spent a huge amount of time running from those titles.  Then a boy came along and he made me watch a movie.  That movie was Almost Famous.  That movie changed my life.

I watched for nearly two hours as this ridiculously smart, good kid went on the adventure of a lifetime.  He met and received advice from his favorite author, Lester Bangs.  He talked him into letting him write for his magazine.  Then, he fangirled his way into getting backstage at a show.  The next thing you know, he’s traveling with an insanely popular band and taking calls from Rolling Stone.  By the end of the movie, as he sat in his bedroom bonding with a rock star, there wasn’t any doubt in my mind as to what I wanted to do with my life and whether or not it was okay.

Cameron Crowe made it okay for me to not only be smart but also obsessive.  It was like how watching West Wing taught me it was okay to be smart, witty and sarcastic.  That people who didn’t understand me or were offended by my attitude weren’t right.  They were just less self-assured.  And nothing pisses off self-conscious people more than someone who’s confident.  And if that person is a woman, then she’s obviously a bitch.  CJ, Donna, Mrs. Bartlet, Kate and Amy all proved to me that I wasn’t a bitch, others were just simpering.  Not my problem.

In other words, those two guys mean a lot to me. Crowe taught me it was okay to be good and smart and a fangirl. Rob Sheffield drives that point home every time he writes a book. I mean, how can a dude who devotes a whole chapter to Rod Stewart not be an absolute geek? Fact: Being a geek is far more about devotion to a subject than IQ scores. Sheffield is just another example of making geekery cool. I hope someday I'm someone's Sheffield or Crowe. That'd be bad ass.

Interestingly enough (or maybe not?), Crowe and Sheffield aren't the only guys to have an impact on my life. A decent portion of my favorite bands and all my weird musical phases have been brought on by other important boys in my life. Remind me to tell you about them sometime. ;)

Posted by Unknown at 2:42 AM No comments: